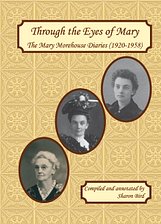 Through the eyes of Mary -

This condensed daily journal written by an average woman depicts life of her family in rural NB from 1920-1958. A great resource for educators and general readers to learn about the early 20th century, inventions, epidemics and how people assisted the war effort at home.

A collection of 200 photos collected during research for A Peek Around the Corner (above). Many images could be any rural NB community  in the 1920s-1950s. Includes railway, businesses, lumbering.

This board book is a great resource for school projects. Aimed at ages 4-8, adults love it too. Find out lots of interesting info and fun facts about our great country. Want to know who came up with the ice cream cone– A NB’er. (This book went to a third printing and is now out of print). Was available at Chapters/Indigo Stores.

Peek Around the Corner - Burtt's Corner, the early years

This is a history of one of NB’s railway communities. Read how residents developed spin-off businesses using the trains for the import of mail and supplies, or the export of local products such as lumber, and potatoes. Also includes anecdotes of rural life.

This book is a loving and dedicated testament to the character and resilience of a little-known rural town and its inhabitants, especially during its early years. The town’s founding and how it received its name, and how it grew and prospered, are covered with great depth. A map showing the town’s location in the Canadian province of New Brunswick is very helpful. The book also details, with considerable precision, the growth of the town including factories and mills, development of a key rail route and station, and other notable businesses. Personalities and folkways also come into play and convey the town’s character. Natural disasters like floods and an earthquakes are described along with epidemics and medical care. The impact on the town of two World Wars, along with a touching letter from a soldier to his folks back home, shows the town’s contribution to the war efforts. The amount of research that went into writing this book is prodigious and impressive.

"For teachers who want to engage young people in the study of history through the use of primary sources, this volume is a treasure trove...."
-  Alan Sears, UNB Dept. of Education (History).

"Sharon reminds us ... the majority of published histories might focus primarily upon politicians and newsmakers ...  but this is a unique opportunity to read a great story of a New Brunswick woman simply known as Mayme."
- Philip Sexsmith, UNB Dept. of Education (English).

"The Photographs and stories provided are sensational. Her knowledge... and passion shine throughout the book. I highly recommend it."

Teachers who saw this book quickly purchased it for their classroom. Adults and children have all expressed it as a favourite in their collections.

""I love your book!! It's unfortunate that it isn't available any longer, as it's a great resource tool for teaching new immigrants and anyone wanting to know about Canada," - anonymous, Immigration  & Settlement Services.